Ever since Bugatti revived with the Volkswagen group’s help, it only offered hypercars with over 1000 hp under the hood.
The Chiron was no exception.

In 2016, Bugatti introduced a particular version for the Chiron range. It was the Chiron Sport, like if the regular Chiron was not enough. But this one was a little different. At the front, the four rectangular, LED headlights looked mean in their sharp enclosures. On the grille, shaped like a horseshoe, the carmaker painted the number 16, resembling the car’s W16 engine. From its sides, the car reached the Veyron, while in the back, the carmaker installed an adjustable wing. Compared to the regular Chiron, the Sport version was lighter by 18 kg (36 lbs) than the standard version.

Inside, Bugatti couldn’t go otherwise than with full luxury and expensive materials. It used sued leather for the gear selector and the steering wheel, smooth leather for the seats, the islands on the dashboard, including the instrument cluster trim, and door panels. Some carbon-fiber accents were installed on the center console.

Under the hood, it was the same quad-turbo W16 engine, pumped up to 1500 hp. It sent the power in all corners via a 7-speed automatic (dual-clutch) gearbox. Its performances were not too much improved when compared to the standard Chiron, but due to the improved suspension and aerodynamic, it was better on the corners. 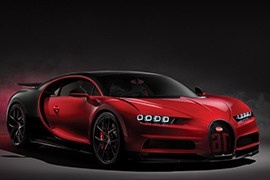