While it shared most of its parts with the Buick 27, the Model 26 was considered the sporty version for its four-door torpedo brother.
In 1904, Buick earned its first medal in a hill-climbing event held on the Thanksgiving weekend, and later on, the company assembled a racing team with Louis Chevrolet as one of its drivers. Between 1909 and 1910, that team collected more than 500 trophies around the country. Worth mentioning that Louis Chevrolet won the first race held in August 1909 at the Indianapolis Motor Speedway. With such a glorious pedigree, the carmaker had all the reasons to include a sports car in its offer. And that was the Model 26.

The car was built on a shortened chassis from the Model 27 and featured the same engine compartment and flimsy front fenders. While the 27 was available with doors, the 26 didn’t have any of them. It was a two-seat vehicle with the gas tank placed behind the occupants. Its rear fender started from the entry cutout and was angled up above the rear wheels.

Even though it was a roadster, Buick considered that it had to be garnished with expensive material. Its leather-wrapped interior offered a great comfort level. For the driver, Buick installed a speedometer and a four-spoke wooden steering wheel.

For the drivetrain, Buick installed a 3.3-liter inline-four engine with an on-head-valve and external push-rods distribution system. Buick’s engineers paired it to a 3-speed gearbox and multi-disc wet-clutch system. 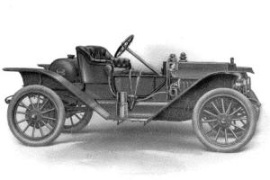