The Lotus Seven built by the British company for twenty years between 1952 and 1972 didn’t die.
It just got better and faster in the shape of the Caterham, and the 2013 620R is a quick and solid proof.

When Lotus built the original Seven, it thought that all a driver need is an engine, a chassis, a gearbox, and a seat. Due to regulations, it installed the headlights, a windshield, and a bodywork so the vehicle should look like a vehicle. Caterham bought the license for the famous British roadster and continued to build with different engines and newer technologies.

The 620R for the Seven was introduced in 2013 and its look was a clear statement of performance. It was a true driver’s car with minimal or no compromises. The shape was the same with a long hood when compared to the rest of the car, an air-intake on the hood and two exposed round headlights mounted on rods. The exposed double-wishbone front suspension and the big 7 on the grille were part of the design appeal.

It is hard to say that the Seven had an interior design. It had two seats in a tiny cockpit and no windshield. It had some wind deflectors, just for a better look. The carbon-fiber panel from left to right in front of the driver was also the instrument panel. On the high center tunnel, the manufacturer installed the gear-stick for the sequential gearbox. The seats were tight and should have been custom made for the buyer.

The engine was a two-liter supercharged unit that offered 310 hp on a car that weighed 545 kg (1201 lbs). That led to a staggering power-to-weight ratio of 568 hp/tonne. 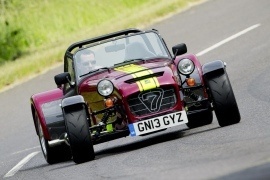