Caterham has always made vehicles for the track more than for the pleasure of driving on public roads.
The Supersport takes it to another level, though. And the Superlight R400 was, basically, a kit-car provided in a crate for someone to assembly it. It didn’t last long until the British company started to assemble them and sell them as complete vehicles.

The Superlight vehicle was provided as a short wheelbase (SR) or long wheelbase (SV) chassis base, providing more room for the passengers and their luggage. That if someone would be crazy enough to travel long distances in a car that has harsh suspension, crisp acceleration and having absolutely no soundproofing.

The Superlight name came from the extensive use of carbon fiber on the dashboard and front wings, GRP aeroscreen and seats racing harness and a removable steering wheel. Of course, no airbag was installed.

In October 2012 a supercharged model called “R600” for a race-series above the R300-class was released, including slick tires and a sequential gearbox as standard. 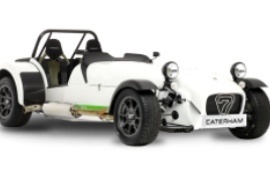