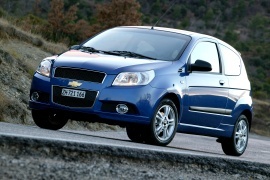 The European branch of Chevrolet introduced the facelift for the Aveo/Kalos lineup in 2008.
It was a small, tall, and affordable vehicle that came right on time for the world financial crisis.

When the money was gone, and big companies were forced to shrunk their teams or cut the salaries, the need for affordable cars increased. GM owned the Daewoo for a few years already and started to build vehicles based on the Korean’s platforms, such as the Aveo/Kalos. Kalos came from Greek and means beautiful. In a three-door version, it looked closer to its name than ever.

The refreshed Kalos looked very different than its predecessor. Its swept-up headlights and the redesigned grille that resembled Audi’s single-frame one made the car looks more aggressive. On the sides, the ascending line connected the front wheel-arches to the taillights. In the three-door version, the rear window was front-hinged and could pop-out to get more fresh air.

Inside, the 2008 Aveo featured the same hard plastic materials for the dashboard. It was a budget car, and no one expected leather seats or soft materials in it. At least, the carmaker provided steering wheel buttons for the audio system, which was carried over from the Opel Corsa. Depending on the trim level, the AC unit was fitted as standard.

Under the hood, Chevrolet installed two engine choices, both with gasoline. A four-speed automatic transmission was available as an option for the 1.4-liter engine, while the 1.2-liter was paired exclusively with a 5-speed manual. 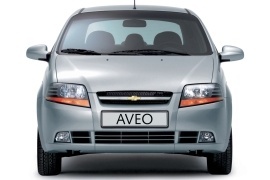 Chevrolet was keen to get more traction on the European market and introduced the Aveo/Kalos lineup in 2004 with three body versions, including a three-door hatchback.
After it bought the Daewoo remains, the bow-tie brand used its already planned models and platforms. Even though it was already present with Opel/Vauxhall, it didn’t have a budget brand, so it came with the Chevrolet badge. But the world economic crisis started just three years later and led to significant financial losses for the American brand.

Pininfarina designed the Kalos (beautiful in Greek) lineup. The Italians tried to give the car a shape that would distinguish itself from the other competitors on the market. With its straight-cut headlights and the split-grille, its image was good. From the side, the three-door looked like a hot-hatch even in real life, unlike its five-door sibling, which looked too bland.

While the exterior promised a vehicle with good qualities, the interior was fitted with a bland design and budget materials. GM couldn’t hide its connection with the former Daewoo models only by introducing a new steering wheel and a new CD-radio (only on top trim levels). The instrument cluster, in particular, offered a cheap-looking design with fake plastic pieces that mimicked aluminum.

Under the posh-looking bodywork, GM used the same old platform from Daewoo. There was a choice of new engines, including a 1.2-liter 16-valves, paired to a 5-speed manual. The upper version, which featured a 1.4-liter unit, was available with a 4-speed automatic transmission.