Does the nameplate of „Blazer” ring any bell? Well, it should.
Because Chevrolet used it before, back in the 70s.

Sure, it was not a real SUV, as SUVs were not really a thing back then. Nevertheless, the old Blazer was a great utility vehicle and a good match for users needing a ride from A to B.

The new Blazer impressed us with its aggressive look, more like the SUV version of the Camaro due to the thin headlights.

While you would expect to be able to take a SUV through a bit of mud and not have to worry, the Blazer was not exactly designed to do that. The front of the car was equipped with a nice honeycomb grille that was open. Plus, the ground clearance was not high enough.

The hood of the Blazer teamed up with the headlights to create the aggressive look by having sharp and strong lines.

Of course, the Blazer could be bought with a variety of exterior paint colors, but the RS’ design was the nicest if you ask me.

The Blazer with the RS package was built with great attention to details, such as the black finish gloss used on the outside, like the front grille, the finish trim on the bumper, the roof rails, the air diffuser at the rear and the floating roof effect.

In the cabin, the RS package gave red chrome finish on the A/C air lids, nice red leather stitchings combined with a beautiful black leather, the RS logo on the passenger’s dashboard as well as on the shifting gear knob.

As any modern vehicle, the Blazer offered Apple Car Play and Android Auto, along with a total of 6 USB ports and a wireless charging pad.

Such beauty came with no low price, users having to take over $40.000 out of their pockets. 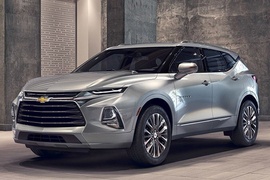