The Camaro stormed the doors at the 2011 Chicago Auto Show with its highest performance version to that date, the ZL1.
Chevrolet Camaro was trying hard to stay ahead of the pack with the fourth generation, but its success was limited. Then, the world financial crisis came along and ruined its chances to be revived. Fortunately, GM already planned the fifth sequel of the Camaro saga, and that was a blast!

Its retro-design look with round headlights and DRLs inside the front fascia under the hood looked mean. The wide grille on the lower bumper was black regardless of the car color, and the fog-lights mounted on the outer side completed the package. A suction-type air-intake on the hood provided more air for the big, supercharged engine. On the sides, the big shoulders over the rear fenders looked muscular, like a cheetah before its jump over a pray.

But the ZL1 was impressive for its hidden parts. Chevrolet installed a 550 hp V8 under the hood, which sent power to the rear wheels via a 6-speed manual gearbox. That setup could rocket the car from zero to 100 kph (0-62 mph) in 4.1 seconds and 0.1 seconds faster when fitted with the optional 6-speed automatic with launch control. A limited-slip differential was employed to handle the huge torque, and the race-ready braking and suspension systems were fitted as standard. 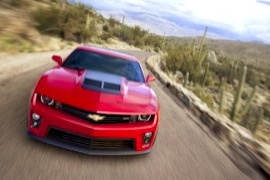