When the GM and Isuzu joined their forces to built reliable workhorses on four wheels, they also agreed who will sell where.
And the GM had the U.S. This is how Chevrolet Colorado ended up having the same chassis as an Isuzu D-Max.

The Chevrolet Colorado was the kind of truck that could be used as a daily driver and a weekend companion. The 2015 model received the “corner step” introduced for the first trim in the Chevrolet Silverado, which had sculpted steps inside the rear bumper to help climbing in and out of the bed. The front fascia was flat and tall. The Extended Cab was available with a 6 feet bed. (1.82 m) and it could tow up to 6,700 pounds (3,039 kg).

The Extended Cab had two rear-hinged doors that provided access to the rear seats. Those were moreover large enough to install child-seats since the legroom was virtually none. Inside, the dashboard was closer to an SUV than to a utility truck. And the vehicle was good to serve well for both purposes. In the center console, a new infotainment system was installed and was able to connect via Android Auto and Apple CarPlay with virtually any smartphone.

Under the hood, Colorado had three engine choices, depending on the market. The standard model featured a 2.5-liter gasoline engine, while the top version had a 3.6-liter V6 unit installed. Both were mated as standard with a 6-speed manual and a 6-speed automatic was available as an option. In some countries, there was a 2.8-liter Duramax turbodiesel engine. 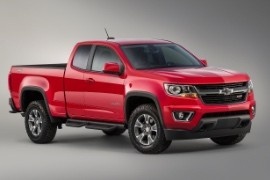