The Stingray Convertible C7 was the last front-engine, open-top Corvette and honored the glorious 1959 Stingray Racer.
Chevrolet unveiled the C7 Stingray at the 2013 Geneva Motor Show in both shapes as a convertible or a coupe with a removable top. The canvas-top version featured a power-operated roof that folded down behind the seats and protected by a tonneau cover.

Its silhouette was easy to recognize. It had the same sharp nose, a long hood, and an aerodynamic greenhouse. In the rear, the short overhang amplified the sport look. Even with the roof-up, the 2013 Stingray C7 looked good. GM made the canvas-top from a three-ply fabric, including sound-absorbing padding and a glass rear window. The carmaker used carbon fiber for the hood to make the vehicle lighter, enhancing the weight distribution.

Inside, there was a significant improvement over the C6, which wasn’t that good on materials quality. The dashboard features a mixed instrument cluster with analog dials and a TFT display which could have been customized to show the information needed by the driver. There was one rotary knob for the drive-mode selector on the central console with a big, round “ESP-off” button in the middle. Another noticeable improvement was the infotainment system that featured an 8” touch-screen display. GM kept the head-up display but with improved functions.

Under the hood, the C7 featured a new, 6.2-liter engine that offered 455 hp and 610 Nm (450 lb-ft) of torque. Chevrolet paired it either with a six-speed automatic transmission or a 7-speed manual. The carmaker upgraded the adaptive dampers with Magnetic ride control and, on the C7, offered more settings than on the C6. It was the last front-engine, rear-wheel-drive Corvette Stingray. 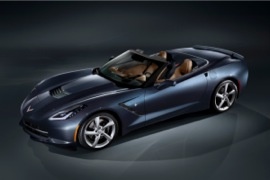