Created as a successor for the Chevrolet Corsa, the Onix shared the same platform with the Aveo/Sonic or the European Opel/Vauxhall Corsa.
Chevrolet had a vital market on the South American continent, and the Onix deserved some credits for that. It was a vehicle designed for that region, and the result was surprisingly good. It was Brazil’s best selling car between 2015 and 2020. And it did that even though it faced stiff competition.

The design was a mix between a European new-edge style and the sharp lines of the Chevrolet Sonic/Aveo. Unlike its older sibling, it featured one-piece headlamps and a taller grille. On the lower side of the bumper, GM installed a set o fog-lights and a broad grille. The greenhouse was unusually short when compared to the total car’s height.

Inside, the instrument cluster resembled the same used in the Sonic/Aveo, with a big, analog tachometer and a digital speedometer shown on an LCD. The center stack featured an option for an infotainment system, which was upgraded later on with Android Auto and Apple CarPlay. It offered two bucket seats at the front while a bench with a split-folding seatback was fitted as standard.

Under the hood, GM installed a specific engine for the South American markets. Apart from the two gasoline units carried over from the Aveo, the carmaker installed a pair of two gas engines. Depending on the trim level and options, a 6-speed automatic was on the options list. 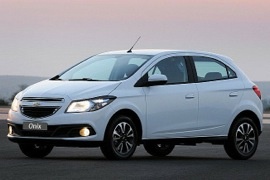