GM needed a new affordable sedan for the South American market, and the most convenient way to make it was to take the Gamma II platform used for the European Opel Corsa and stuck a trunk behind it.
Chevrolet took charge of the Brazilian market with two cars based on the same platform: the Onix and the Prisma. The former was a hatchback, while the latter was a sedan. While the hatchback was clearly addressed for younger people, the latter was more of a family vehicle. Still, the carmaker didn’t want to make it looks like a cheap vehicle.

At the front, the design team used the big, bold grille with a transverse bar in the middle where the golden bow-tie took center stage. The front fascia featured a pair of big, swept-back headlights extended over the front fenders, while the lower bumper sported a wide black area with a grille in the middle flanked by the fog lights.

Inside, the Prisma offered room for up to five adults. Although there was little room for three passengers, they could share the space for in-city trips. Chevrolet offered an infotainment system with a seven-inch touch-screen. The carmaker didn’t consider installing a coolant-temperature gauge in the instrument panel, using a blue-red warning light instead. 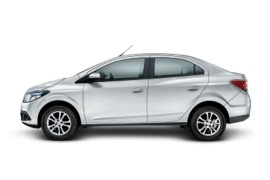