When an emerging market needs a cheap, affordable, seven-seat vehicle, the last concern is the exterior design, and the Chevrolet Spin was just one proof of that.
While it might look easy to design a cheap car, it is actually pretty hard. The designer needs to know how much material will be included in the stamping, and if there are too many curves involved, more material will be used, and the final product will be more expensive.

With a tall-looking profile and a front fascia that resembled the Chevrolet Spark, the Spin was never produced to impose respect or win a beauty contest. But its designers still managed to install a cross-bar over the radiator’s grille to place the bow-tie Chevrolet badge on it. The swept-back headlights resembled those found on the Chevrolet Cruze. The car was longer than a regular hatchback with an added volume behind the rear doors, with taillights that resembled those from the Bolt or Cruze hatchback.

The interior was the one that mattered, and the Spin offered up to seven-seat inside. Maybe they were not the most comfortable ones, but at least could take the kids to the school and back. The dashboard revealed the designer’s imagination and proved to be more pleasant-looking. Its wave-like shape, and two-tone color scheme, made it look better. Depending on the option, a sat-nav infotainment unit was installed on top of the center stack. The instrument cluster featured a large dial for the tachometer and an LCD for the speedometer and the on-board computer readings.

Under the Spin’s hood, Chevrolet installed a choice of five engines, ranged from 86 hp to 108 hp. Depending on the market, the car could run on gasoline, diesel, or ethanol (for the South American Market). 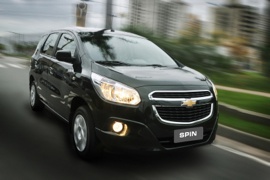