Based on the same platform as the Chevrolet Traxx or Opel Mokka, the Tracker was the small SUV offered by the bow-tie brand on the South-American market.
The same name was used for the Russian market.

Using a small-car platform, but upgrading it to a small cross-over wasn’t a bad idea for Chevrolet. The vehicle was easy to build in various locations in the world, including in Mexico facilities for the South-American continent. The front fascia of the vehicle looked more aggressive than on other markets, to mimic a bigger vehicle even though the car was more of a crossover than an SUV.

The interior was good enough for five passengers, but with limited room in the rear. Its trunk could hold up to 1372 liters (48.3 cu-ft) of space, with the rear seats folded.

For driving aids, the car featured ABS with electronic brake-distribution (EBD), traction control and ESP. For the comfort features, there was a bigger list with rear parking sensors, cruise control, power windows and locks, on-board computer and a USB + Bluetooth connectivity with the mobile phone.
The drivetrain had only one engine option of a 1.8-liter engine that could be mated to a 6-speed automatic gearbox. 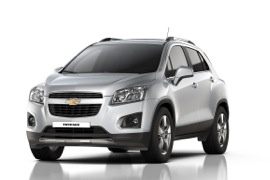