The full-size Chrysler 300C has received a major change in 2014 and even if the overall look is about the same, underneath the surface there were a lot of differences.
The Chrysler 300 has a long history in the American motor industry. For a long time, the name was burred until the DaimlerChrysler brought it back to life. And they took some parts from few Mercedes-Benz models and installed it into the “gangsta-style” Chrysler 300. The styling, with a high belt-line and a low roof, was kept after Fiat cut a deal and took-over the Chrysler Group forming FCA. But they added some improvements such as the LED daytime running lights (DRL), bigger brakes, new interior and lighter components for the old, but good, Mercedes-Benz suspension system.

Inside, there was a new instrument cluster, with a small color display between the tachometer and speedometer. On the central console, the new infotainment unit featured a standard 7” color display that featured the Uconnect system. The system can be upgraded to an 8.4” display and a better sound system.

Under the hood, there was a revolution. The FCA installed the best technology it could fit inside. The Chrysler 300 featured a V6 or a V8 engine. Both were mated to an 8-speed automatic transmission, compared to the 5-speed offered by Mercedes-Benz on the previous generation. Another interesting option is the gear-selector, which is a rotary knob. On top of that, the 2014 Chrysler 300 was available with an all-wheel-drive system. 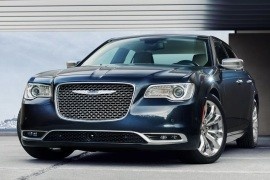