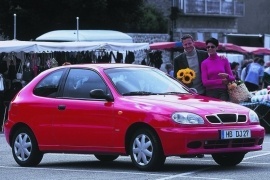 Daewoo decided to change the Nexia/Cielo lineup and introduced the Lanos on the European market in 1996 in a few body shapes, including a three-door hatchback.
The Korean carmaker was still building a vehicle based on the old, 1984 Opel Kadett. Yes, it was an affordable vehicle, the customers still loved the compact German car, but it was already too old. Moreover, it didn’t have the proper engines. Daewoo approached Italdesign institute to make a new vehicle. If they couldn’t afford to change the engines and the platform, at least they could try to make a better-looking vehicle.

The Lanos was introduced at the peak of the biodesign era, with round curves and surfaces. Giorgetto Giugiaro made its design, and the final details were shaped at Italdesign, in Italy. The three-door version was the most unsuccessful version, and the styling was one of the reasons why.

Inside, the carmaker installed comfortable seats and a curved dashboard, which resembled the one found in the first generation Mondeo. It was just a coincidence, of course. Lanos was an important evolution for the Korean brand, which tried to grow faster than its main home-competitor, Hyundai Motor Company. To increase the trunk space, the Lanos featured a folding seatback in one piece.

The platform was carried-over from the Nexia/Cielo but with different settings for the suspension. Porsche helped to develop the car. For the powerplant, Daewoo worked closely with several suppliers. Its engine range was good to fit in everyone’s budget, but the car came too late on the market to save the parent company, which was sold to GM in 2001.