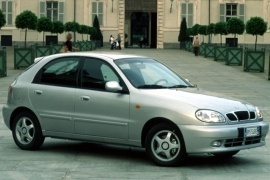 By 1996, the compact hatchback Daewoo Nexia/Cielo was already old, and the Korean carmaker decided to replace it with a new model: the Lanos.
The Nexia/Cielo was based on the 1984 Opel Kadett platform, and despite its affordable price, it wasn’t an option anymore for the European customers. Its sales were drowning, and that had a significant effect on the Korean carmaker finances. The Lanos was the last compact vehicle produced by the Korean company, and its success was limited due to its weak performance.

The Lanos was introduced at the peak of the biodesign era, with round curves and surfaces. Giorgetto Giugiaro made its design, and the final details were shaped at Italdesign, in Italy. The car was available in three shapes: hatchback with three and five doors and a sedan.

Inside, the carmaker installed comfortable seats and a curved dashboard, which resembled the one found in the first generation Mondeo. It was just a coincidence, of course. Lanos was an important evolution for the Korean brand, which tried to grow faster than its main home-competitor, Hyundai Motor Company. To increase the trunk space, the Lanos featured a folding seatback in one piece.

The platform was carried-over from the Nexia/Cielo but with different settings for the suspension. Porsche helped to develop the car. For the powerplant, Daewoo worked closely with several suppliers. Its engine range was good to fit in everyone’s budget, but the car came too late on the market to save the parent company, which was sold to GM in 2001.