Introduced at the 2012 Indonesia International Motor Show, the Ayla was a great example of a small car built by a giant carmaker.
Toyota owned a big chunk of the Daihatsu carmaker and helped it to develop the Ayla for emerging markets. The result was a small-sized vehicle fit for rough roads. On the other hand, Daihatsu was already known in Japan for its small-sized vehicles that could fit in narrow streets and provided a great fuel-efficiency. In Europe, Daihatsu tried its luck with several pocket-size off-road vehicles, but its success was limited. Maybe it should try the Ayla as well, but it kept it for other markets.

The Ayla’s egg shape was interrupted by a few angular lines on the headlights and the aggressive bumper design. On its sides, the ascending line followed a hot-hatch sporty profile, ended with a roof-spoiler mounted on top of the liftgate. Its high-mounted taillights were protected for small bumps in the parking lot or by shopping carts in the rear.

Inside, it was surprisingly roomy for its size, thanks to the high seating position and the tall greenhouse. Despite being a small, budget vehicle, it offered adequate comfort features and a sound system with a USB port and a CD-player. The instrument cluster was dominated by a huge speedometer that took center stage and a smaller tachometer on its left side. An LCD took the right side and showed info for the on-board computer.

Under the hood, Daihatsu installed a choice of two gasoline engines that offered 68 hp and 88 hp, respectively. The carmaker paired both of them to a 5-speed manual while a 4-speed automatic was on the options list. 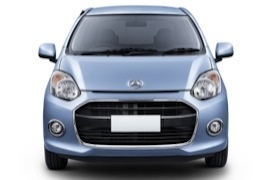