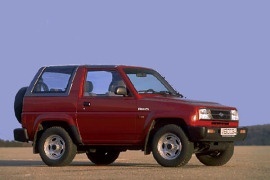 Daihatsu Feroza strengthened the Japanese company on the export market in 1989, and five years later, it refreshed the model.
At the beginning of the ’90s, there were just a handful of small 4x4 vehicles on the West-European and the U.S. market. The Feroza offered a good mix between a small vehicle, fit for cities, and enough off-road abilities to go with the big guys from Nissan, Toyota, or Jeep.

With its squared-looking bodywork and flared wheel-arches, the Feroza seemed bigger than it was. The rectangular headlights and flat, black grille with a chromed surrounding begged for more attention on the road. An interesting featured was the removable hard-top that was installed over the rear passengers. The spare-wheel was installed on the tailgate since there was no room for it in the small trunk.

Inside, the 1994 Feroza featured a new dashboard. In comparison, the previous model was fitted with a handle-bar on top of it after the facelift that was removed. A flat area at the top and a vertical rim for additional dials was installed. The main instrument cluster remained almost the same. Most of the cars were fitted with cranked front windows.

Daihatsu knew how to make its small 4x4 on-demand vehicles, but it didn’t have good engines’ expertise. Toyota, as its major stakeholder, did. That’s why under the hood, there was a 1.6-liter Toyota engine, tuned to fill the needs of a light off-road vehicle. The transmission was the same 5-speed manual, with a low-range transfer case. The Feroza featured front-wheel independent suspension and a bigger engine than the more known Suzuki Samurai. 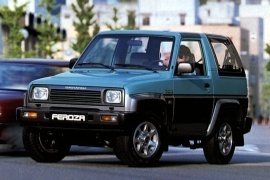 The small off-roader from Daihatsu had a brief presence in the U.S. and the Feroza was one of the models it tried to sell. In Europe, it had a better chance due to the exterior small dimensions, fit for crowded old cities. But its abilities in city parkings and defeating curves and potholes was just one of its ability. But the biggest advantages for the Feroza were its light weight, fuel-efficiency and reliability in off-road use.

There was only one engine offered, a 1,6-liter gasoline, with different power outputs. It was either with carburetor or fuel injected, with power ranging between 84 hp and 95 hp, respectively. There were few options for the transmission. The most known was a 5-speed manual, a two-speed transfer case, and 4-wheel-drive. The main traction was on the rear, with the front being engaged for off-road use. The transfer case had low and high gear. No lockable differentials were available. Another option was a 4-speed automatic transmission, also with a 4wd system. For some countries, the Feroza was offered with an all-wheel-drive system and lockable center differential, but no transfer box and no low-gear.

While performance on-road was modest, the lightweight body-on-frame vehicle was very good in off-road. The short overhangs and big ground clearance made it a very nimble vehicle.