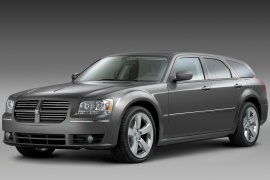 Launched in 2005 as a 2006 model, Dodge Magnum was the station wagon version for the Dodge Charger.
In 2007, Dodge showed the facelifted version of it. The most important change on the outside is the front side of the vehicle, where it received a more aggressive look.

There were a lot of differences between the Dodge Charger and the Magnum. The inside quality materials were different and Dodge management decided to revamp the Magnum’s interior fit and finish at the same level as its sedan brother.

The interior of the Dodge Magnum is large enough for five people. With its very big trunk of 770 liters (27.7 cu-ft), which can be extended to 2010 liters (71.1 cu-ft) with the rear seats folded down, it is a very good alternative to a minivan.

For the engine compartment, Dodge selected a base level with a 2.7-liter V6 engine that produces 167 hp. On the upper trim level RXT it also offers a V6 but with a bigger displacement of 3.5 liters and 214 hp on tap. The SRT version comes with the 5.7 liter V8 and 345 hp engine. The top of the range version was the SRT-8 with the 6.1-liter Hemi engine, which produces 425 hp.

For the transmission, Dodge offers the Magnum only with an automatic 5-speed transmission. The RXT and SXT versions could be ordered with all-wheel-drive, while the base and the top-version were RWD only.

The Dodge Magnum range was discontinued at the end of March 2008 due to low sales figures. 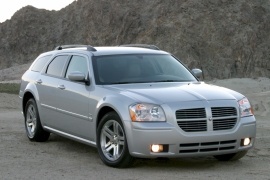 The last generation of the Magnum was a rather short-lived model and was produced for only 4 years.
The concept that previewed the car was unveiled at the Los Angeles show. The first ever Dodge Magnum was produced in 1978, and the nameplate made a return in the mid 2000s.

The model released in 2004 was offered with three V8 engine options, developing up to 430 hp and mated with a 5-speed automatic transmission. The car had a wide stance and bigger wheels, being Dodge’s first station wagon and looking like a combination between a muscle car and a family car, while Dodge called it a sport tourer.

The Magnum was available in three level trims: SE, SXT and RT. The SXT and RT were available with AWD. Design wise, the Magnum was very similar to Dodge’s Charger, with a modified hood, fender and headlights, while still keeping the signature Dodge grille. The cargo area was very spacious for a station wagon.

The SRT8 version of the Magnum had a 20-inch alloy wheels, was equipped with red Brembo brake calipers and had a honeycomb grille. Leather upholstery was optional for the SXT trim level and was a standard for the RT and SRT8. The car was also equipped with a cargo management system.

In 2008, the Magnum was revised and Dodge tried to bring it closer to the Dodge Charger’s design, while distancing it from the Chrylser 300c’s one. A new paint color was available for the first time, Dodge naming it “Torred”.