Dodge made a special version for the Viper in 1999 and named it ACR after the American Club Racing and carried over some GT2 technologies.
The carmaker paid homage to the Viper GTS-R World Champion FIA GT2 race car with the ACR special edition. It turned it and enhanced its racing abilities, so private owners could use it on race weekends. Even though it was not a racing car, the technologies used made it as close as possible and still keep the car road-legal.

With or without stripes on it, the Viper ACR sported a few differences from the rest of the Viper range. Dodge tried to modify the car, so it was harder to be replicated in home garages, at least for a while. The ACR lost its fog lights from the bumper, and the resulting holes were connected to air intakes that brought more air to the new K&N air filters. Thanks to the new system, the engine could breathe more easily and provided some extra ponies. From the sides, the BBS light-alloy wheels were specifically designed for the Viper ACR. Unlike the GT2 edition, introduced in 1998, the ACR didn’t feature a big wing in the back.

Inside, Dodge removed everything it could to make the car lighter. Gone were the a/c unit, the stereo, and the speakers. Thus, it shaved about 60 lbs (27.2 kg) from the total car’s weight. Apart from the fog lights, which were not available, the A/C and the stereo were on the options list so the driver wouldn’t sweat too much on the track.

Under the hood, the ACR featured the same eight-liter V-10 engine. Thanks to the new air-intake system, the car provided 466 hp, ten more than the regular Viper. Unlike its normal version, the ACR featured stiffer suspension. 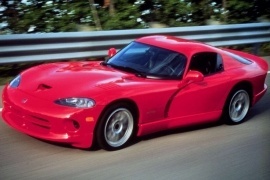