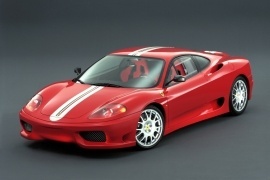 Ferrari unveiled the Challenge Stradale version of the 360 model at the 2003 Geneva Motor Show and revealed the car’s true intentions as a race-car adapted for public roads.
After it launched the regular 360 lineup, the carmaker produced a race-version to compete in the F360 Challenge series. Then it adapted the racing model for street use by adding the mandatory features.

Ferrari kept the same shape for the Stradale version as the rest of the 360 model, but it added some subtle changes to the options list. For instance, the car was available with thinner, lightweight windows for European customers. The U.S. rules didn’t allow them, so they were banned on the States side. There were new, carbon-fiber door mirrors, which were standard. A unique set of light-alloy wheels found their place on the car, but they sported a five-lug bolting system, unlike the race version. The single-lug wheels used for the race car were not legal anywhere.

Inside, the owner could found a bare interior with minimal features. Even the radio was on the options list. An important upgrade over the regular version was the paddle-shifters behind the steering wheel. Strangely, Ferrari installed a longer + paddle so the driver could upshift faster. Unlike the race version, the seats were more comfortable and featured padded and leather upholstery.

The engine was the same as on the street version, although Ferrari changed the regular exhaust with a sport one that was as loud as the legislation allowed it. The carmaker offered the 360 Challenge Stradale exclusively with an automatic gearbox.