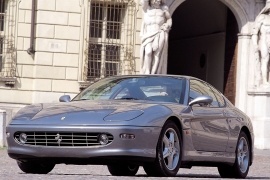 Ferrari introduced an upgraded version for its luxurious 456 GT adding an M from “Modificata” (Modified) behind the nameplate.
Ferrari sold only a few hundreds of the wedged-style 412 model before axing it in 1989, and it took three more years to return with a proper GT vehicle with a front engine and rear-wheel-drive. But when it introduced the 456 GT in 1992, the customers rushed in. After six years on the market and close to 2,000 units sold, it refreshed the lineup in 1998 and launched the enhanced version: the 456M GT.

While it looked similar to the 1992 model, the 456 M featured a few modifications on the outside. At the front, it kept the pop-up headlights, but there was a new bumper with corner-mounted turn signals. Its fog lights were now round instead of squared and found their place in the lower apron, inside the wide three-slat grille. Ferrari removed the air vents from the hood and reshaped them with rounder lines.

Inside, the carmaker dramatically changed the interior. For starters, it replaced the dashboard and introduced round vents instead of the squared ones used before. Ferrari moved two gauges from the center stack inside the instrument panel and left only three of them under the center vents. That allowed the carmaker to install a stereo in front of the gear-stick instead of behind it as on the ‘92 model. Last but not least, it changed the seats and adorned them with horizontal stitches instead of vertical ones, and enhanced the headrests with the Prancing horse logo.

Under the hood, the carmaker kept the same 5.5-liter V-12 engine which produced 442 hp. It paired it as standard with a six-speed manual. Even in the base version, without any options added, it was the most expensive Ferrari. 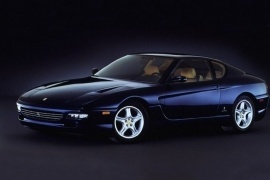 The Ferrari 456 was available in GT and GTA forms, the only difference between them being the type of transmission.
The engine used on the 456 was a 5.5 liter V12 that derived from the Dino V6 which produced 442 hp thanks to its 4 valves per cylinder and the Bosch Motronic 2.7 engine management system.

The chassis was a tubular steel spaceframe while the body used a composite bonnet and aluminum panels to keep the weight down.

The 456 designation comes from the fact that each cylinder displaces 456 cc and this was the last Ferrari model using this naming scheme.