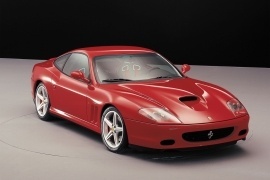 Ferrari introduced the 575M (Modificata – Modified) in 2002 as its flagship model in the GT lineup, and it was designed for comfort and performance.
With an accent on comfort.

Ever since its first vehicle that sported the Ferrari badge, the Italian carmaker tried to offer performance vehicles for those who used them on the track and public roads as well, for relaxed leisure drivings. The 575M was less a racy one and more of a grand tourer.

Its design was derived from the previous model, the 550 Maranello, and it kept the name of the Italian town where the company had its headquarter. Due to its long hood that sported an air-intake, the clear-glass covered headlights, and wide grille in the lower part of the bumper, the 575M was easy to be mistaken with its predecessor. At the front, the only difference was the absence of the fog-lights incorporated into the main grille. In the rear, the 575M featured new taillights, with the turn-signals inside the outer lamps.

Inside, the designers decided to get rid of the old dashboard design, which was more suitable for a race-car than for a grand tourer. They ditched the center-mounted tachometer from the instrument cluster and moved it on the right side of the panel, and made room for a same-sized speedometer. Also, the additional three-gauge set that was on top of the 550’s center console was deleted.

Under the hood, Ferrari installed a 5.7-liter V12 engine paired as standard to a 6-speed manual gearbox. As an option, Magnetti-Marelli provided an F1-type robotized transmission. It was the first time when such a transmission was installed in a V12 Ferrari. 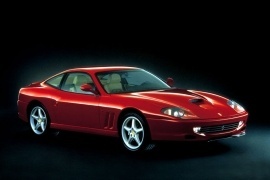 Ferrari introduced the 550 Maranello in 1996 as a replacement for the Testarossa and 512 TR models, and it was a new revolution for the Italian carmaker; it moved the engine back to the front.
Enzo Ferrari had a saying: “The horse pulls the carriage, not push it”. He never liked the idea of a mid- or rear-engine sports car. Yet, he had to agree with that since it was a better technical solution for the weight distribution. But the Italian engineers didn’t forget its saying and tried to do it both ways. They installed the engine in front of the cabin, behind the front axle. Thus, it resulted in a mid-front engined supercar. The 550 Maranello was the last Ferrari that featured a V-12 engine paired with a manual transmission.

Its design was signed by Pininfarina Studios, who was already a respected partner for most of the Ferrari vehicles. Its curved lines started at the front with a smiling grille on the front apron and a set of fog-lights. Its glass-covered headlights replaced the idea of the pop-up headlights from the ’80s and led to a better design language, either if the car was with the driving lights on or off. The long hood with an air-scoop in the middle was typical for the 550 Maranello.

Inside, Ferrari extensively used the carbon-fiber details for the seats, center stack, door panels or dashboard. Even the instrument panel featured a carbon-fiber background. Another interesting feature of the interior was the seat belt system, which showed the belt crossing through a cut inside the sport-bucket seat’s upper side.

Under the hood, Ferrari installed a 5.5-liter V12 engine paired to a six-speed manual transmission. It was fast. Sometimes it proved to be too fast for public roads.