Three years after the introduction of the Portofino at the 2017 Frankfurt Motor Show, the Italian car-maker introduced the M version for it, a more powerful version for the open-top supercar.
In the Italian’s brand designation, M stood for “Modificata” (Modified), which meant an improvement of an existing model. Since it was a Ferrari, those modifications were about more power and better performances than of the model it evolved from.

From the outside, the Portofino M featured a redesigned front and rear bumper. The rest of the car was very similar to the standard Portofino. It was understandable since the Italian car-maker was in lockdown due to the COVID 19 pandemic. The M version was the first Ferrari launched exclusively online.

The interior of the Portofino M featured a new central horizontal aluminum blade that divided the instrument panel, the air conditioning vents, and the passenger display into separate areas. The other control functions were located in the lower section, with a 10.25” touchscreen in the middle of the center stack.

The drivetrain was heavily upgraded. While the displacement and the torque remained the same, the power was increased from 600 to 620 hp. The twin-turbo V8 engine was paired to a new, 8-speed, dual-clutch gearbox. It sent all the power to the rear wheels via an electronically controlled differential. The performances were improved over its predecessor. Another new update was the addition of a gasoline particulate filter (GPF), to lower emissions and comply with the Euro 6d standards. 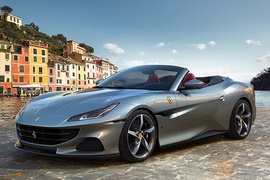