While it might be still considered a mere Fiat 500, the Abarth 695 Tributo Ferrari was a special, limited series that provided more excitement for the little Italian car.
Abarth and Ferrari had a history together, and after they shared the same roof under Fiat group, it wasn’t long before the three brands joined into a common project. While it couldn’t be made a Ferrari with a Fiat badge on it, the best solution was to take Fiat’s most wanted car, the 500, ask Abarth to tune it, and then add some Maranello spices on it. The result was the 500 Abarth 965 Tributo Ferrari.

At a glance, it was the same 500 that rattled inside cities with its tiny headlights and flashy color. But it was more than that. It featured a lowered front bumper, aerodynamically profiled side sills, and a different rear bumper. The 17” light-alloy wheels were definitely something else than on any other city vehicle around. It wasn’t a maxi-500; it was a mini-Ferrari. Its two gray stripes on the hood matched the color from the apron’s accents. And the stripes went on over the car and onto the tailgate.

Inside, Abarth installed high-bolstered sport bucket-seats upholstered in Alcantara. The dashboard featured carbon-fiber accents, and the thick steering wheel was different than in any other Fiat. There was no gear-stick on the center stack, just a few buttons to select the gearbox program. In addition to those, Abarth installed a pair of paddle shifters behind the steering wheel for the driver to manually change gears.

Under the hood, a 1.4-liter turbocharged gasoline engine provided 180 hp in a car that was just a little bit longer than a SMART ForTwo. Thanks to its tuned suspension, tweaked brakes, and fat tires, it was one of the best city hot-hatches on the market and priced more than any other Fiat from that time. 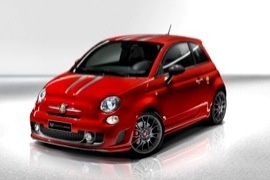