The refreshed Fiat 500X has a mildly revamped exterior with new LED light clusters and full-LED headlights.
For the mid-cycle facelift, which could be the first of many considering how Fiat has accustomed us, there is also an updated interior, but the biggest changes have probably happened under the sheet metal. By far the biggest exterior change is represented by the all-new LED headlights, which also sport a revamped cluster design, just like the LED taillights do. It should be mentioned the the full LED headlights are of course optional, but the standard ones also feature a new design. Revamped front and rear bumpers, along with new wheels design and exterior colors complete the facelift look.

Under the hood is where the magic happened, since the facelift 500X is the first Fiat model to feature all-new Firefly turbocharged engine family, which are built on a modular 0,33-liter cylinder unit and come in both three- and four-cylinder versions. All of them are Euro6/D-TEMP compliant and are fitted with Gasoline Particulate Filters (GPF) to conform with stricter emissions. Since all of them are made entirely from aluminum, the three-cylinder version weighs just 93 kg (205 pounds). As its predecessor, the facelifted Fiat 500X crossover is available in both front-wheel-drive and all-wheel-drive guise, having been built on the same platform as the Jeep Compass. 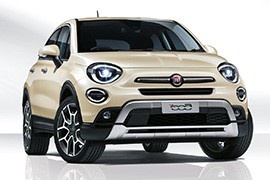