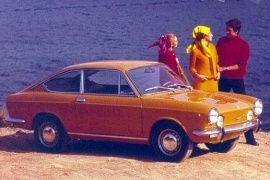 Introduced in 1965, the Fiat 850 Coupe wasn’t such a great success at first.
But the Italians saw a potential winner, with the proper adjustments. And they improved the car for the 1968 model.

It was the poor’s man Porsche. A Fiat badged coupe with a rear engine and rear-wheel-drive system, which could handle well and didn’t look like its cabin was pumped to make room for rear passengers. Their idea was to create an affordable, good-looking, sporty coupe that could take you from A to B without the hustle of high fuel consumption and provide enough pleasure for the driver.

The 1968 model featured the same front fascia as its predecessor, but with a different badge. Its chromed bumper was enhanced with the introduction of a new set of rubber parts that, allegedly, made the car safer. Since the car was introduced on the market with a pair of round headlights that didn’t fit the profile of a sporty vehicle, its designers installed a pair of fog lights mounted on the bumper. Another modification was for the turn signals, which were mounted under the bumper. In the rear, the four-round taillights resembled the sporty Italian cars built by Ferrari.

Inside, Fiat decided to install a tachometer to improve the sporty feeling. A Nardo steering wheel with wood-trims was available on the options list. Its front seats were relatively flat and didn’t offer too much grip while cornering, but they looked right for the car. As for the rear passengers, they had to be short. Very short!

Under the hood, the Italian carmaker installed a bigger engine. It was improved to a one-liter displacement to deliver a decent fuel-efficiency and be quicker and faster than the regular Fiat 850 sedan. 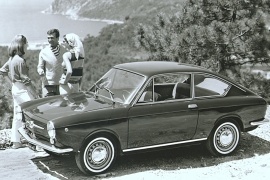 After the successful Fiat 600, the Italian car-maker dared to increase the size of the small vehicle, increased its engine displacement, and produced the 850.
In 1965, it made the Coupe version.

The market was thirsty for affordable, easy to buy, and run coupe vehicles. Since the platform afforded, all that the car-maker had to do was change the shape of the 850 and offer it to the market. It was a success.

Fiat’s designers took their inspiration from the Ferrari Dino when they shaped the 850 Coupe. Financial reasons forced them to use more parts from the regular model, leading to a flat front face and the two round headlights. The trunk was in the front, and its lid sat lower than the fenders. With a sloped roof toward the engine compartment, which was in the back, the 850 Coupe showed an athletic profile that captured the imagination for speed and performance, even though the small engine was not designed for that.

The interior was simple, with a two-spoke steering wheel and a small instrument cluster with two round dials. It was made to look like a sportier vehicle with a speedometer on the left and a tachometer on the right. The floor-mounted gearstick was different than other Fiat models, which featured steering-column mounted gear levels. There was room for two in the front and barely room for adults in the back. But, unlike the 850 sedan (still with two doors), the 850 coupe was available with power steering.

The small, 0.85-liter engine was placed in the back. It was paired to a 4-speed manual gearbox. It offered more power than the 850 sedan.