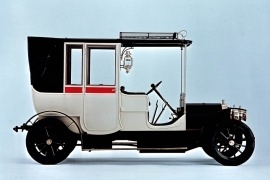 In the first years of the XIX century, Fiat bought the Ansaldi company, which already planned the production of the Brevetti (Patents) model.
After Fiat took the project, its engineers improved it and raised its power from 10-12 hp to 15-20 hp. Since all the engines were built manually, it was difficult to state a precise power. Some sources stated that those installed on the Brevetti were able to produce up to 26 hp. The project was built with several technical improvements over its competitors on the market, making the theory even more plausible.

The Brevetti was offered in two body versions: as a torpedo or as a cabriolet-royal. The former was a novelty on the market. It meant that the car had panels flush to the bodywork from the front grille to the back of the vehicle, and it meant that it featured doors on the sides. The cabriolet-royal royal offered a closed cabin in the back for the passengers and no doors in the front for the driver. Still, at least there was a windshield to protect him.

From the technical point o view, the Brevetti was a success due to its 4-speed manual gearbox when most of the other car-makers offered only three. A multi-disc clutch system was a premiere on the market and helped the car ran smoother. Finally, the car dropped the transmission chain in favor of a driveshaft and conic gears for the differential.