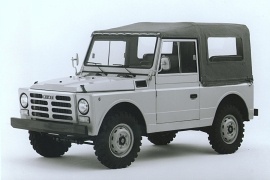 Initially designed for military purposes, the Campagnola was later released for the public.
Unveiled for the first time in a civilian version in 1974 at the Belgrade Motor Show, the Fiat 1107 Campagnola was a pure off-road vehicle based an entirely new concept.

To lower the fuel consumption, the old 4-speed gearbox was replaced by a 5-speed transmission, thus higher torque was available at lower speeds.

Heavy towing was one of the Campagnola’s strongest points, thanks to the very short reduced ratios.

With the possibility of equipping the 1107 Campagnola Nova with first aid equipment, it could have served as an ambulance.

In 1976, a few vehicles were produced in collaboration with Renault, featuring the Renault type 829 engine. It was sold under the name Renault TRM 500. 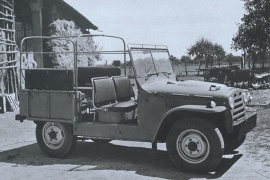 WWII revealed the importance of a light, agile, off-road vehicle, and the Italian government ordered Fiat to built one.
And that was the beginning of the Campagnola.

It might be the best off-road vehicle you’d never knew it existed. But it did more than that. Fiat sold the license to former communist countries to build them, and its boxy body easily moved through mud and potholes decades after the car was introduced. It was the true Italian Jeep and, moreover, it was a reliable and dependable vehicle, even though it lacked in the power department.

From the front, it looked like a Mini Moke, with its horizontal slats on the grille and the round headlights. The Italian government equipped the car for military use with various bodyworks and features. But it wasn’t long until the civilian market cried for the new off-road toy vehicle built by Fiat, and the carmaker received a green-light to offer it on the free market. It built it in two main versions: convertible and with a metallic hard-top. The flat panels from their sides and the hood’s rounded edges made the car looks better in real life than in pictures.

The interior was hardly a comfortable place to be. A three-spoke steering wheel and a set of gauges mounted in the dash-panel center were all the features for the driver. Even the wiper’s motors were exposed in rough-looking aluminum cases at the base of the split windshield. Campagnola’s seats were some metallic rims with pillows on them. As for the doors, well, they could have been removed and left behind.

Under the hood, Fiat offered the Campagnola with different choices, diesel, and gasoline. The vehicle featured a 4-speed manual gearbox, a transfer case with low range, and a locking rear differential.