Fiat introduced the third generation of the Panda 4x4 at the Paris Motor Show in 2012.
It was the only all-wheel-drive vehicle in its segment.

The Italian carmaker introduced the Panda lineup in 1980, but it wasn’t until 1986 when it launched the 4x4 version for its small-class vehicle. That version proved successful, and the carmaker decided to introduce all-wheel-drive Pandas to the following generations. That said, in 2012, the third generation of the all-wheel-drive Panda was ready to face the snow and tracks.

Fiat built the Panda 4x4 on the same platform as the 500 and the Panda. Unlike its siblings, it featured a higher ground clearance and specific design parts, such as the black underbody protection on the front bumper and the plastic moldings on its sides. The designer continued the same theme on the rear bumper. A silver plastic shield was introduced on the car’s bottom to further enhance the car’s off-road ability.

Inside, the design was modified when compared to the 4x2 versions. It featured a new green fascia variant around the instrument cluster. The car featured specific fabric seats with a special design and eco-leather details. A high console over the central tunnel added a further storage compartment to the 14 already present on 4x2 versions.

The technical side was the most important part of the little Panda 4x4. Its all-wheel-drive system was based on a Haldex center differential and the ESP system, which braked the wheels without traction and sent the torque to those with a better grip. The gasoline engined vehicles featured a very low range first gear so the car could cope better with steep ramps. 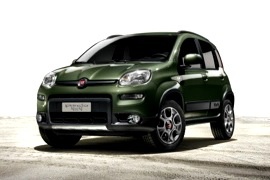