Fiat revived the Uno name for the South-American market, built it in its Brazilian factory, and marketed it as the “Nuovo” Uno since 2010.
The Uno was introduced on the market in 1983, and it was a huge global success for the Italian carmaker. It was produced in Europe until 2002 in Fiat’s Polish factory, but eventually, it was withdrawn and replaced by the Punto on the small segment. On the other hand, the Brazilians still missed it and asked Fiat the permission to revive the name. They even made the initial design sketches while the final details were made in Italy. Then, the production started in the Banta factory.

While the car’s overall look resembled more of a Panda than an Uno, the South-American customers were happy with the new car. It stood on the same platform as the trusted Fiat Palio, which was also successful on that market. Its swept-back headlights covered the hood and fenders’ front upper corners while the almost completely masked grille sported three small vertical gaps. Its wrapped-around bumpers and the oversized wheel-arches made the car looks bigger than its 3.8 m (148”) length.

Inside, the carmaker offered something for low-budget customers with a simple dashboard design. While the materials were not top-quality, the carmaker managed to offer a pair of cupholders and two airbags. On the upper trim levels, Fiat offered an air-conditioning system and power windows. For the rear seats, the carmaker installed a one-piece folding bench with a tilting system that allowed a 10 liters (0.3 cu-ft) trunk increase while still offering enough room for two passengers.

Under the hood, the carmaker installed a choice of three gasoline engines when the production started, while Fiat offered a flex-fuel system later on. 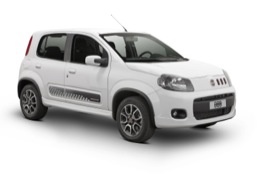