Fisker returned on the market with a brand new SUV in late 2021, after spending several years in financial struggles after the Fisker Karma vehicle.
This time, it didn’t return with a hybrid but with a full-electric SUV. Like the Karma, the Ocean is focused on design but with a few engineering marvels.

At the front, the carmaker placed a large black grille with a hexagonal pattern on the apron, flanked by body-colored elements and the orange, boomerang-style turn signals. In the middle, the carmaker put the radar sensor for the automatic cruise control and the AEBS systems. Up above the bumper, the carmaker placed the car’s model name, Ocean, in the middle, while on the sides, it installed the LED headlights. Those three elements were connected visually via a light strip. Unlike most electric cars on the market, the Ocean had the motor at the front. Thus, even though some thin lines were on the cover, it was not a regular opening hood.

On the driver’s side, there was the charging port on the front wheel fender. The tall, sculptured door panels raised on the rear side, above the rear wheel arch. A set of black fender-flares adorned the wheel fenders. The D-pillars featured a cutout as a design element at the back, while the tailgate featured an opening, drop-down window.

Moving inside, the Ocean featured large seats and exclusive microfiber materials. The flat-bottom steering wheel stood in front of a TFT display placed in front of the driver. Fisker set a second touch-screen on the center stack for the infotainment system, lower than the instrument panel, and used recycled materials for the interior. A tall center console separated the front passengers. 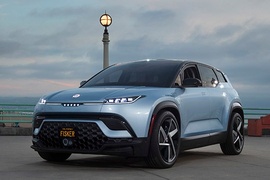