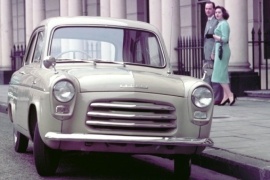 The 1953 Anglia was a two-door sedan built by Ford in the U.K. and it featured a modern outside design and a comfortable interior even if the access was more difficult.

The Ford Dagenham factory was built on an island. It produced its own steel from raw materials with electricity and gas which Ford produced. It was the most complex car-factory in Europe. There, the American car-giant built the Anglia 100E. A car that looked into the future with a “heart” built in the past.

The Anglia 100E was a small, three-box, a sedan with rounded edges. It was the first model that featured a flush, straight bodywork. Gone was the era of flared, exposed, fenders with a tall and narrow engine compartment. The three horizontal chromed bars on the radiator’s grille were considered a fashion item.

Inside, the PVC-covered seats were reliable and dirt proof. For the driver’s comfort, it featured a hydraulically clutch system. Thus, the car was easier to drive by women. A wide and deep parcel was installed in front of the front passenger. The access to the rear seats was by tilting the front seats. It offered enough room for three adult occupants.

Due to the front independent suspension, the Ford Anglia 100E was more comfortable than its predecessors or other cars on the market. The engine was fitted with side-valves, which made it somehow obsolete even for those times. It offered 36 hp, which was enough to move the 737 kg (1624 lbs) vehicle. The standard transmission was a 3-speed manual. There was an option for a semi-automatic gearbox, named Manumatic.