Ford made a bold move forward when it introduced the Raptor version for the 2022 Raptor and gave the car a much more powerful engine and a suspension setup that transformed the SUV into a fast off-road beast.
The American brand already had a Raptor lineup, and all of them were highly capable on trails. Thus, the Bronco had a promise to keep, and Ford ensured its customers that they won’t be disappointed. For starters, it improved the car’s image with beefier, 35” tires and a high-lift suspension. Its upgraded Dana heavy-duty axles, both front, and rear, led to a longer wheelbase, extended by 8.6 inches when compared to the rest of the Bronco range. In addition, a sturdy-looking aluminum shield installed under the front bumper protected the engine from hits and rocks, while the fenders received wider flares over the tires.

Inside, there were minimal upgrades in terms of design, but a keen eye for detail could notice the new ring that surrounded the GOAT (Goes Over All Terrain) all-wheel drive selector placed on the center console. In addition, Ford installed a standard touch-screen infotainment atop the center stack, in line with the instrument cluster, which was also digital. Finally, a few carbon-fiber trims adorned the steering wheel, with the Raptor badge written on the lower spoke.

Under the hood, the carmaker placed a new powerplant that offered more power and torque than the rest of the Bronco range. It was mated as standard to a ten-speed automatic transmission. Moreover, the transfer box was upgraded and offered a 3.06:1 gearing, made especially for rock crawling. 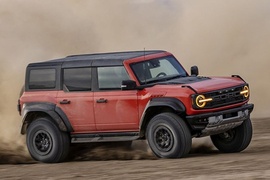