The sixth generation of the Ford Explorer was launched at the North American Motor Show in 2019 and it shared its platform with the Lincoln Aviator.
It represented the return to the RWD platform.

The original Ford Explorer was launched in 1991 and it replaced the two-door Bronco II model. Its name came from a trim-package used for the F-Series between 1967 and 1986. Over time, it evolved into a mid-size crossover SUV. It was equipped with the Ford Co-Pilot360 system that included automatic emergency braking, pre-collision assist, Lane-Keep System, blind-spot monitor, and cross-traffic alert.

The big, mesh-grille on the front with flash-mounted headlights were part of a sporty look of the vehicle. A big air-dam was on the apron, which helps to cool the engine. While the first generation of the Explorer was a true offroad vehicle, with low-range gear and body-on-frame structure, the 2020 model featured a unibody construction, which was lighter and improved the fuel-efficiency.

Inside, the car featured a hi-tech approach, with a TFT instrument cluster and an infotainment display on top of the center stack. There were two displays in the options list: an 8” landscape-type and a 10” portrait-type. The Explorer was available with three seat rows, with the middle ones offered with reclining and sliding function.

Under the hood, the Explorer could receive a choice of engines ranged between an inline-four up to a twin-turbo V6. It was available as a hybrid or plug-in hybrid as well. 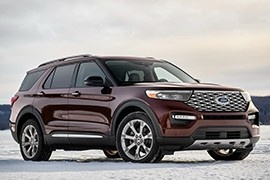