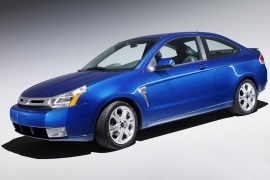 Ford decided to introduce a new Focus lineup on the U.S. market in 2007, but it wasn’t the European version; it was just a new shape on the same old platform.

The Focus Coupe was designed to compete against other compact-coupes on the market, such as the Honda Civic. With the Toyota Celica that already left the segment, it had a chance to make a difference.

A restyled front fascia with a grille inspired by the Ford Fusion made the Focus Coupe looks more stylish than before. Its swept up and backward headlights offered an unusual look even after Ford standards. Its two-door coupe shape was pleasant but didn’t stand out from the rest of the three-box sedans available.

Inside, Ford introduced just a few options, such as the ambient lighting with seven colors to chose from, the SYNC infotainment unit developed with Microsoft, and a sunroof. Its dashboard was simple, with curved lines and a bland look for the instrument cluster. For a regular family sedan, it was OK, but not for a coupe. Thanks to the Focus standard platform, the Coupe was able to host up to five adult passengers inside, as long as they were fit and not taller than the average. 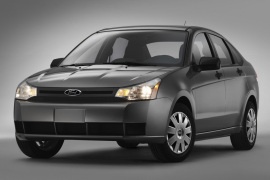 In a market dominated by import cars, Ford proved that it could be competitive and offer a car for the masses in the difficult times of the world financial crisis.
Ford introduced the second generation of the Focus for the U.S. market in 2007 as a 2008 model year. Unlike its European sibling, it was offered as a sedan and coupe as well. In sedan version could have been ordered from a frugal economy car to a sporty touring model.

It might be just a matter of taste, but the European’s headlights were better looking with their swept form. The U.S. model featured a squarish form with the upper side, like the vulcanian Spok’s eyebrows. Depending on the trim level, the grille was black or enhanced with two horizontal chromed slats. The designers didn’t seem to work too hard to install a simple, rectangular grille in the lower bumper with round fog-lights on the sides. From the sides, the Focus sedan with four doors featured a nice-looking, but fake, air-vent behind the front wheels, continued with an ascending line toward the back of the car.

Ford chose to play safe with black plastics and silver trims on the dashboard, center stack, and center console for the interior. On the instrument cluster, the designers placed an LCD was at the bottom, surrounded by the four-dials layout. For the infotainment unit, Ford worked with Microsoft to develop the SYNC system, available as an option.