The 1970 Mustang was produced in a very small number, especially the Boss 429 version built in around 500 units.
The muscle-car war was on, and all the carmakers had something to say in that. Even smaller manufacturers started to interfere with the Big-Three, such as the AMC. Ford Mustang was still a fierce competitor, and the blue-oval brand tried to keep its coupe ahead of the pack with yearly upgrades. In 1970 it introduced the Boss version and made some changes to the bodywork.

For starters, it dropped the four-headlights look and pushed them inside the grille, which was wider. From its sides, its specific fake air-intakes in front of the rear wheel arches were deleted. In the rear, the Mustang kept the three vertical taillights, but they were protruding again. Unlike the fastback version, the coupe featured a three-box design but a very sloped rear window and a wide C-pillar. Its rear quarter panels were widened and curved.

Inside, the car was kept simple, almost spartan-looking. A round knob shifter was used for the manual versions, while a T-type with push-button was used for the automatic transmission. Some vehicles were featured the Hurst shifter, especially for the Boss 301 versions. The upholstery was only black or white leather. A special version, named Grande, featured a vinyl roof and high-back bucket seats, along with a thicker carpeting and race-style door-mirrors.

Under the hood, Ford installed seven engine choices, starting with a small inline-six. At the other end of the scale was the ultra-rare Boss 429 V8. The carmaker installed a 3-speed manual, a four-speed manual, or a three-speed automatic depending on the engine. 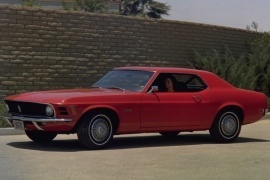