Ford built the Mustang’s third generation as a car that would appeal to a wide range of buyers, developing a niche segment.
Back in ‘79, the number one criteria for the coupe buyers was the styling. Ford threw away the former plans of building large, curved fenders and gave the car a wedged look. On the other hand, it tried to sell the Mustang as a daily-driver sports-coupe vehicle. While the daily-driver and the coupe criteria were achieved, the sports part lacked the stamina.

Ford developed the Fox platform, which led to the Fox-body’s nickname for the third generation of the Mustang. It featured four square headlights and a raked grille in front of the radiator. The car was available as a 2-door coupe or a 3-door hatchback. While the former was ended in a short decklid, the latter featured a sloped tailgate. It was noticeable the small window behind the doors and the thick C-pillar.

The interior was disappointing for customers due to its family-car design. A wood-trim on the dash-panel looked more appropriate for a sedan than into a sports-car. Fortunately, Ford decided to install a full set of dials and gauges, including amp-meter, oil-pressure, coolant-temperature, tachometer, and a speedometer. At least, the Mustang offered good space for the driver and the front passenger. There was not too much room in the back, but that wasn’t important for a coupe.

Under the hood, Ford installed a four-pot engine for the base model, a V6 as an intermediate one, and a V8 for the top version. Soon after its launch, the carmaker started to have trouble with the V6 unit’s supply and replaced it with an inline-six. 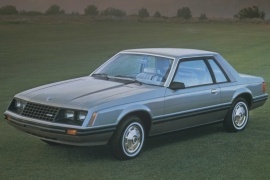