The Mustang’s third generation was introduced in 1993, and it came right after the Fox-body Mustang, a car that almost ruined the nameplate. But Ford recovered well and introduced a car that changed the course of the pony-car.

First of all, the fourth-generation Mustang was the first that was not available as a sedan anymore. It was built only as a fastback (hatchback) or convertible. Unlike its predecessor, it was designed with curved lines and swept headlights. The black, trapezoidal grille featured the silver running horse in the middle. The carmaker installed a small wing in the back and a special set of light-alloy wheels with five spokes instead of the previously used three, double-spoke, ones on the GT version. The taillights featured three vertical lamps instead of the previously used three horizontal ones. It was closer to the original 1964 ½ design.

Inside, the Mustang GT featured leather upholstery and front bucket seats with higher bolstering on the sides. The six white dials on the dashboard and the design inspired by two-seat race-cars made the car more appealing. It was not a revolution on the inside since Ford put its efforts into the drivetrain.

There was a completely new engine with OHC (on-head cams) instead of the older pushrod system under the hood. It offered the same power and torque as its predecessor, but it was lighter. The front suspension was improved with the addition of a reinforcing cross-car brace between the struts towers. From the performance-wise, it was not such a big gain, but the fuel-efficiency was increased. 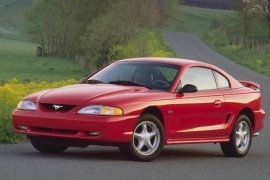