The name is old, this car is new and has high-hopes on the ever-expanding crossover market.
It is meant to be loved by those who, 20 years ago, were teenagers and loved that little sport-coupe car from Ford. Except that, this time, the Puma is a crossover built in Eastern Europe after a 1.8 billion dollars investment, not a compact sports car built in Germany.

Like the old Puma, which introduced a new design language (new-edge design), the new Puma starts a new generation of Ford electrified vehicles. It features a 48-volt architecture and it is a mild-hybrid with underfloor batteries.

The new Ford Puma will have only one engine: the 1.0-liter EcoBoost with three cylinders and three power versions, starting with a 125 hp (same as the original Puma) and ending with a 155 hp version. Except for the base model, all the other trim levels will have a mild-hybrid function.

The small, 4.2m (13.7 ft) crossover Puma is able to carry 456 liters (16 cu-ft) of luggage. But don’t expect something extraordinary from the available passenger space. Five people will fit inside, but not for the longest drive of your life. Those who will share the backseat are not going to be very happy after a 2-hour drive.

The new Puma also introduces the newest Ford infotainment system, SYNC 3. The system allows users to keep their phone in the wireless charging point, while they can browse or listen to music uninterrupted. 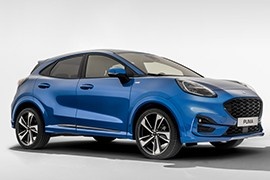