Designed and named by Ford as a “personal car,” the two-seat Thunderbird was upgraded in 1956 and fixed some of the 1955 models.
By today’s standards, it might be called a mild facelift.

Hence General Motors introduced the Corvette in 1953 and named-it a “sports car” Ford didn’t want to use the same words and called it “personal car,” but it was, in fact, sportier than the “Vette.” It had its drawbacks, but at least it was offered with a three-speed manual gearbox and a V8 under the hood. In 1956, the T-Bird was improved.

The Thunderbird was fitted as standard with a removable hard-top that created a huge blind spot in the rear quarters. That’s why Ford installed the circular windows on the side panels starting with 1956. It also moved the spare wheel behind the trunk in a chromed cradle on the rear bumper. That led to slightly better weight distribution and better handling. Unlike the Corvette, the Thunderbird could keep-up with the European cars on the corners.

Inside, the carmaker installed a bench that looked like two bucket seats for two passengers. The critics considered the big steering wheel to be too close to the driver’s chest, but nobody cared. The T-Bird was an instant success.

Under the hood, the 1956 model featured a more powerful engine than the one fitted on the 1955 model-year. It was tuned to offer more power for the versions paired with the three-speed automatic transmission than for those mated to a manual gearbox. 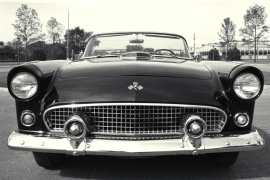