The first generation of the Thunderbird was not that successful as Ford expected, and the design team was called into action for a final refresh.
Ford was stunned. In 1955 it sold more T-Birds than in 1956, despite the fact that it didn’t get a full-year sales calendar for its new, then introduced model. The marketing department already noticed that customers asked for a four-seat version, but that wasn’t ready yet. They had to work on the first generation and make it more appealing to the market. In 1957, Ford refreshed the coupe in a final attempt to revive the nameplate. It did it, and the sales increased.

Ford’s design department revised the 1957 model. At the front, the bumper was lowered under the broader grille and lost the rocket-inspired chromed elements from the 1955 model. The rear quarter-panels featured fin-tails, which were more usual on luxurious vehicles. It was exactly what Ford tried to do with the Thunderbird: to make it a personal luxury coupe.

Inside, the 1957 Thunderbird featured a new dashboard with an upper part that covered all the panels. Thus, it protected the stereo and the buttons for the ventilation system. Inside the instrument cluster, Ford installed five round dials with chromed rings around them on an aluminum panel. The gear-lever was still placed on the floor.

Under the hood, Ford offered the same two engines from the 1955 model but slightly upgraded. An attractive option was the supercharger, which could increase the power up to 340 hp, and the result was a surprisingly quick personal luxury coupe. The 1957 Thunderbird was the last two-seater built by Ford until the 1982 Ford EXP. 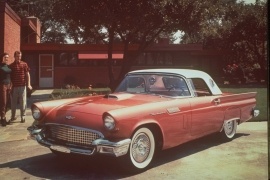