Ford tried to keep the T-Bird momentum and, even though it made some changes for the 1958 model year, it introduced new ones in 1959.
The sales were high, and Ford’s management was happy. Even though the car was not on the cheap side of the market, the Thunderbird remained on top of many people’s wishlists. For the 1959 model, the blue-oval management decided that it had to turn its eyes toward women and advertised the vehicle next to a woman inside a country club.

From the outside, it was easy to spot a 1959 Thunderbird due to its new front fascia. The car’s chromed grille was under the bumper and featured two protective rubber protections on the lower side. While these were almost useless in the event of a crash, they helped the car looked better and induced a higher sense of protection. For the convertible version, the driver could open the rag-top and hide it under the trunk lid at a touch of a button. The rear taillights received a mild change and became wider.

The Thunderbird’s interior was improved. A significant upgrade was the full-length center console that separated the front bucket seats. Like its predecessor, the 1959 T-Bird featured a flat bench, fit mostly for two adults since the transmission tunnel that crossed the car from the gearbox to the rear axle diminished the legroom.

Under the hood, Ford offered a new engine choice: the 430 ci (7.0-liter) engine developed for Lincoln, which produced 345 hp. It was paired to a Borg-Warner three-speed automatic gearbox. 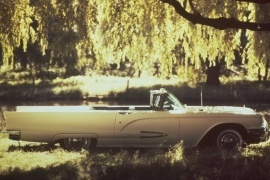