The third generation of the Thunderbird was a big revolution in the model’s history since it came with a completely new design approach.
It still remained a personal luxury vehicle, with either a hardtop or a soft top, but it was sleeker. Unlike the second generation, which featured a flat front area, the 1961 T-Bird was a work of art penned by Bill Boyer. The car was unveiled in 1960 as a 1961 model. Even though Ford didn’t want the car to be considered a sports car, it looked fast, even though it wasn’t.

With its narrow front end, continued with a raked-forward lower grille and a curved hood, the Thunderbird looked like it was ready to cut through the air like a hot knife through butter. Its steep windshield was the only part of the car that raised above the waistline when the rag-top was down and hidden behind the cabin. Its slightly sloped bodywork and small fins on top of the rear (huge) quarter panels resembled a jet-fighter.

The interior was fit for four passengers with two bucket seats at the front and a bench for two in the back. True, it wasn’t everybody’s cup of tea, but it was on top of their wishlist for those who appreciated the car’s design. No wonder Ford sold more than 200,000 units of it, in both shapes, from which more than ten percent were convertibles. Later on, the carmaker added the sports roadster version, which featured a fiberglass cover for the rear seats.

Under the hood, Ford installed a 6.4-liter engine paired to an automatic transmission. It tried different setups of heads and carburetors, resulting in various power outputs. 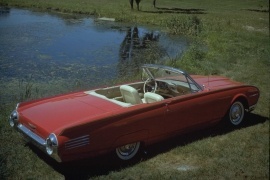