It was the last year of manufacture for the fourth generation of the Thunderbird, but it was important for the novelties the car brought.
Back in ‘66, the Mustang got most of the attention of the market. But the Thunderbird was something different. It was built more like a luxury convertible than a sports car. It was more expensive than the original pony-car and offered more comfort than most cars on the market.

The ‘66 Thunderbird (or T-Bird) featured a metallic grille with vertical slats. Instead of the blue-oval badge, it featured a stylized bird. The headlights cluster mimicked an eagle’s eye shape. A small central bulge enhanced the look of the, otherwise, flat surface on the flat hood. The quarter panels featured covers for the rear wheels, with a distinct chromed rim around the wheel-arch. As a luxury convertible, the Thunderbird was available with a power-roof that was hidden behind the cabin when retracted.

Ford designed the Thunderbird as a personal luxury coupe, inspired by the European luxury cars. Inside, it took inspiration from the “jet-era,” with a tilted forward-center stack where it placed the controls for the stereo and the air-conditioning unit. The instrument cluster featured a linear speedometer and four, round, with aviation-inspired gauges for the oil-pressure, fuel-gauge, coolant temperature, and charging. The steering-column mounted gear-selector showed its position on a separate dial.

In 1966, Ford introduced a 6.4-liter engine that provided 320 hp paired as standard with a three-speed automatic transmission. 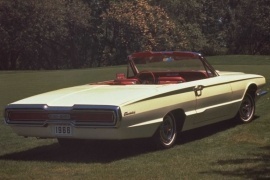