When Honda introduced the 2017 Civic Type-R on the market, it ended a 16-year hiatus of rear independent suspension and regained the hot-hatch segment’s crown.
While other carmakers adopted turbocharged engines to boost the power of their powerplants, Honda squeezed more ponies from naturally aspirated ones. But in the end, it had to adopt the turbocharged technology for its hot-hatch. So it installed them on the tenth generation of the Civic and carried over the powerplant from the ninth Civic Type-R.

From the outside, the Type-R looked like a madman tuned it. It featured a massive wing on the back and a dazzling look. Even though not all the grilles on the front and rear bumpers were not functional, they looked mean and added an aggressive look for the Japanese hot-hatch. On the hood, the carmaker added a functional scoop that fed air to the intercooler. Another unique feature of the Type-R was the three pipes in the back. The outer ones were exhausts, while the middle was for an intake and changed the engine sound.

The interior was reworked when compared with the rest of its Civic siblings. It featured wide, sport-bucket Recaro seats upholstered in red suede, which sported the Type-R badges embroidered on their seatbacks. The dashboard looked similar to the other Civics, but it gained a Type-R logo and a new, red background color. Thanks to its unique steering wheel and metallic pedals, the carmaker created a sporty, racy vehicle for petrolheads.

Thanks to the all-wheel independent suspension and adaptive dampers, the Type-R regained its status among the hot-hatches. Moreover, unlike other competitors, Honda installed a six-speed manual only for the vehicle and added a standard limited-slip differential. As a result, the car managed to score record lap-times on various race tracks worldwide, including on the famous Nurburgring. 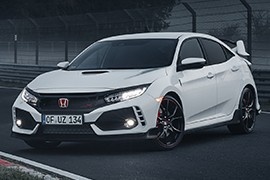