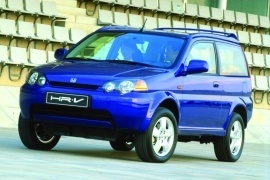 Honda was not very keen to make a new station-wagon, but it tried something different: the High Recreational Vehicle.
The crossover market segment name was not invented in 1998 when Honda introduced the HR-V, a vehicle built on top of a small vehicle platform. It extended its wheelbase, placed a different body on top of it, and the new model was ready to hit the market. Its success was instant due to its low running costs, high seating position, and the 4x4 option. At first, it was available only in a 3-door version. In 2002, Honda introduced a refreshed version.

Honda designers imagined an attractive shape for the headlights, with a twin semi-circular shape at the bottom, that cut their way through the top of the bumper. There was a small opening between them to coo the engine, but the bigger grille was on, the lower part of the bumper, between the two new fog-lights. For the greenhouse, Honda tried a mix between a station wagon and a hatchback. With the raked windshield and the flat, vertical tailgate, the result was good and formed a spacious interior. At the back, the vertically mounted taillights resembled those installed on Honda CR-V. The three-door version was shorter by 110 mm (4.3”) than its five-door sibling.

Inside, the car’s vertical sides and the thin doors and interior panels left enough room for five adult passengers, but most versions offered four-seats since there were only two seat-belts in the back. The folding and tilting rear bench could increase the trunk area when needed.

Under the hood, Honda offered the HR-V with a choice of two engines. Both of them were of 1.6-liter displacement but provided different output power. The Japanese crossover featured either a front-wheel-drive or an all-wheel-drive system. 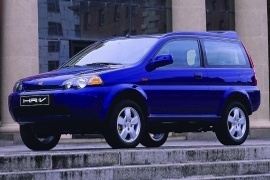 Honda introduced the CR-V on the SUV segment in 1995, and it was a big hit right from the start.
But at the same time, the Japanese carmaker worked on a smaller project: the HR-V.

In 1999, there was a big confusion regarding the HR-V: nobody knew what that car was. It wasn’t an SUV, it wasn’t an MPV, and certainly, it was not a station wagon. The crossover name didn’t exist, and all the media considered the HR-V as a light sport-utility vehicle. It was more than that; it was the dawn of a new automotive era.

The car’s designers didn’t take anything from the Honda range. It was a vehicle designed from scratch, and the only limitations were the technical platform. With oddly shaped headlights that took some space into the front bumper and an inch tall grille, the HR-V was a mixed breed between a compact station wagon and an SUV. The roofline was ended with a small wing in the back and a flat tailgate. Only the taillights resembled, somehow, those installed on the CR-V. In the beginning, Honda introduced only the three-door version, which was considered more important for younger customers.

Inside, the High Recreational Vehicle (HR-V) offered enough space for five adults and a trunk big enough for a weekend in a mountain lodge. Thanks to its big window area and oversized, door-mirrors, the car offered a 4x4 vehicle feeling. It featured standard amenities such as air-conditioning, power windows, power steering, and a decent audio system.

Under the hood, Honda installed a 1.6-liter naturally aspirated engine with only 106 hp. It was paired to a 5-speed manual fitted as standard or a CVT as an option. Honda sold the car with either a front- or all-wheel-drive.