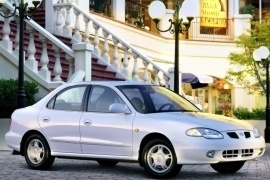 After just three years on the market, the second generation of the Lantra surprised its customers with a facelifted version for the entire range.
Unlike the non-facelifted version, this time, both the sedan and the station-wagon featured the same front fascia. It was like brand recognition for a company that didn’t find its place on the market, but it didn’t want to give up. The Korean carmaker insisted on building the car on its platform, but with a Mitsubishi engine for the base model and a Peugeot-sourced diesel four-cylinder unit.

Hyundai realized that it needs a grille to cool the engine and installed one on the facelifted model. It left a thick vertical slat to host its chromed badge. To make the new front fascia more appealing, the carmaker changed the headlights and the bumper.

Inside, the carmaker kept the same flowing lines from the non-facelifted version, but depending on the trim level, it added some amenities such as the sunroof. Hyundai didn’t want to sell its vehicles without a minimal package, but that was differently expressed according to the market where the car was sold.

Under the hood, depending on the market, the Lantra featured a wide choice of engines ranged between 1.5- and 2.0-liter gasoline units. The latter provided 139 hp, so the car was surprisingly quick. 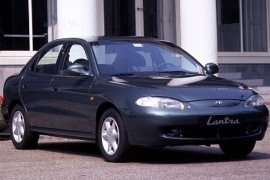 The Lantra’s first-generation stayed on the market just five years before Hyundai replaced it in 1995 with the Lantra J2.
Hyundai was relentless. It pressed hard its R&D department to work on new products. Basically, by the time the first Lantra went on the assembly line, the carmaker started developing its successor, not the facelifted version.

The biodesign era was about to begin, and the wedged-shapes of the ’80s started to be phased-out from the market. That trend fitted like a glove to the Korean design style and, even though they couldn’t master it, they tried. It was a trial and error process, but Hyundai accepted the high price of rapid development. Maybe some shapes were not that original, such as the ovoid-shaped headlights, which resembled those from the 1991 Honda Civic, but they fit nicely on the curved bodywork panels.

The interior featured a simple design with more curved lines. Even the vents were curved and followed the exterior’s biodesign trend. It offered decent room for four adults, with good headroom for the rear passengers. As for the legroom, that was depending on the front passengers’ height.

The Lantra J2 featured fully independent suspension, which led to a higher level of comfort and better cornering speeds. But it wasn’t a sporty vehicle. Hyundai developed the 1.6-liter engine and replaced the older Mitsubishi units used on the Lantra J1. 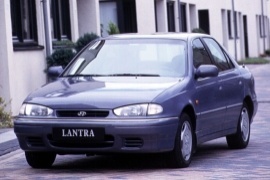 Just two years after introducing the Lantra lineup, Hyundai decided to apply a mild facelift to the small-segment sedan.
While it didn’t have a significant experience in the car industry, Hyundai management knew that it must gain brand awareness. It tried to improve its products and showed that on facelifted models. The same situation with the 1993 Lantra showed some exterior modifications when the carmaker improved the car’s quality.

From the outside, the most noticeable difference was the front fascia. Hyundai dropped the formerly used angular headlights with a new pair that featured softer edges and clear turn-signals. The grille was narrower and featured the new company’s logo.

Inside, the Lantra was known for its spacious cabin, despite the car’s length. Like some other Japanese vehicles, it featured two large dials for the tachometer and speedometer, the coolant temperature gauge on the left side, and the fuel-level gauge placed on the right. The air-conditioning unit was available on the options list or standard for the upper trim levels. Its interior was good for up to four adult occupants, with limited legroom for the rear passengers.

Hyundai relied on its partnership with Mitsubishi and continued to choose three engines supplied by the Japanese carmaker. The Korean carmaker fitted the Elantra with a 5-speed manual or a 4-speed automatic. 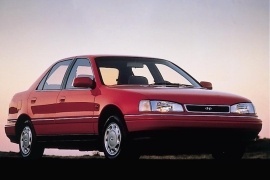 Due to copyright issues, the subcompact vehicle from Hyundai received different names on different markets.
Hyundai was still a small carmaker who made its way into the world car market. It evolved with licensed parts and engines from Mitsubishi Motors, and it entered the U.S. and the European market. In 1990, the Korean carmaker launched the Elantra and entered direct competition against Honda Civic, Toyota Corolla, and Opel/Vauxhall Astra Mk 3.

The car’s exterior looked like it was inspired by some other Japanese vehicles designed in the late ’80s and then trimmed at the edges to make it look modern. There were some curved lines and panels, but not too many to hide the wedged-shapes. A small grille at the front resembled some of the Honda models, while the angled-down headlights were similar to the European’s Opel/Vauxhall Vectra.

The interior was nice, with a curved dashboard and an instrument cluster extended over the center stack. Like some other Japanese vehicles, it featured two large dials for the tachometer and speedometer, the coolant temperature gauge on the left side, and the fuel-level on the right. The air-conditioning unit was available on the options list or standard for the upper trim levels. Its interior was good for up to four adult occupants, with limited legroom for the rear passengers.

Under the hood, Hyundai relied on its partnership with the Mitsubishi, who provided all three engine options, ranging from 86 hp to 126 hp. The Elantra was fitted with a 5-speed manual or a 4-speed automatic.