The second generation of the Hyundai Nexo was released in 2018 and was the vehicle to offer the best range of any hydrogen car by that time, 600 km.
Basically, the way the Nexo worked was by combining hydrogen and oxygen, resulting in electricity and water. While the electricity got burned as fuel, the emission was represented by the water. The electricity powered the motors that turned the front wheels.

The Nexo drove like a regular electric car and boasted 160 hp.

Built on a completely new platform, the fuel tank had a capacity of 150 liters, thus the long range. And while charging a regular electric vehicle might have taken some time, the Nexo could be refuelled in only 5 minutes.

One of the downsides for 2018, the hydrogen fuel station were as available as necessary. The infrastructure was one of the biggest barrier in selling the Nexo.

The Nexo had an impressive practicality, with enough room for 5 adults to sit comfortably. The cabin looked premium with high quality materials use throughout, while the modern large touchscreen media system and the big drive info display made it look futuristic.

Top-notch safety systems were part of the package, such as lane keeping assist, blind spot monitoring - a more advanced feature that allowed showing live images with the traffic behind, images transmitted by the cameras mounted in the wing mirrors, rear cross traffic alert and numerous airbags.

Equipped even with remote parking, the Nexo could park itself.

Autonomous driving was possible up to 140 km/h and the Nexo even slowed down in the case of speed cameras were present along the way. 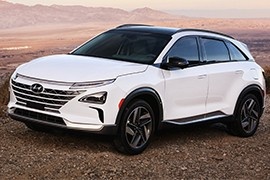