Hyundai broke new grounds when it introduced the Santa Cruz in its lineup and opened the gates for new, compact pickups.
Unlike most pickups on the market, the Santa Crus was based on a unit-body construction, like the Honda Ridgeline, except that it was smaller. The Korean carmaker showed the concept vehicle in 2015 but waited another six years to unveil the production model. It was an innovative vehicle, and Hyundai called it a Sport Adventure Vehicle.

Its front fascia was unique on the market. It featured a broad grille with dark-chromed elements. Between them, it installed a few LED daytime running lights, not only two like anyone else but four on each side! On the lower side of the bumper, on the outer areas, the carmaker installed the headlights. From its sides, the car revealed its half-SUV and half-pickup shape. Its four feet bed (1,220 mm) featured a smaller trunk under the floor, on the rear side.

Inside, Hyundai stepped up the game and installed a fully digital dashboard, with a 10.2” TFT screen in front of the driver and a standard eight-inch infotainment display on top of the center stack. A 10.2” touch-screen was available on the options list. Underneath the infotainment display, the carmaker installed another touch-screen for the climate control unit. In their quest for a digital future, Hyundai’s designers deleted the volume knobs. For seating, the carmaker installed a pair of bucket seats at the front and a folding bench in the back. The latter featured a lifting system, something like Honda’s Magic Seats mechanism, which revealed a few storage areas for items that shouldn’t be kept in the bed.

For the Santa Cruz, Hyundai installed a four-pot engine, with or without a turbocharger. Both versions were paired to an eight-speed automatic (dual-clutch) gearbox that sent the power in all corners. 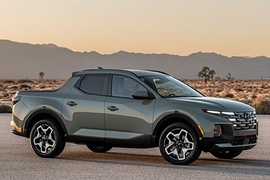